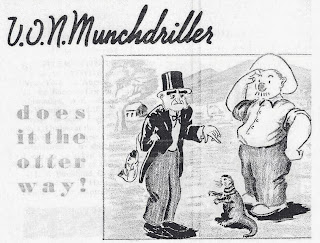 The 10-part V.O.N. Munchdriller series is the among the first known writing of Fredric Brown to be published professionally. All ten stories appeared in The Driller, which was published by Excavating Engineer Pub. Co., South Milwaukee, Wisconsin.


The Driller is kept in bound volumes at the New York Public Library’s Science, Industry and Business branch. I checked all issues from Sept. 1933 through Dec. 1945 and confirmed that only these 10 stories exist.

Though the stories are unsigned, tearsheets were found decades ago in Brown's files. An editor’s note in the Feb. 1937 issue on p. 13 credits Fredric Brown with writing the V.O.N. Munchdriller stories; illustrations are by Argus “Doc” Leidy.

Posted by Jack Seabrook at 10:51 AM No comments:

Curtains for Me by Anthony Gilbert 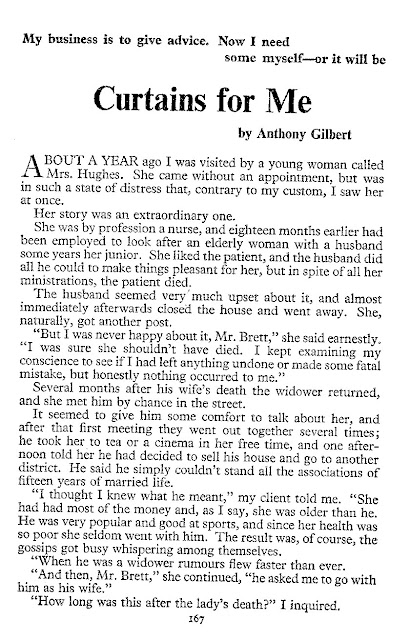 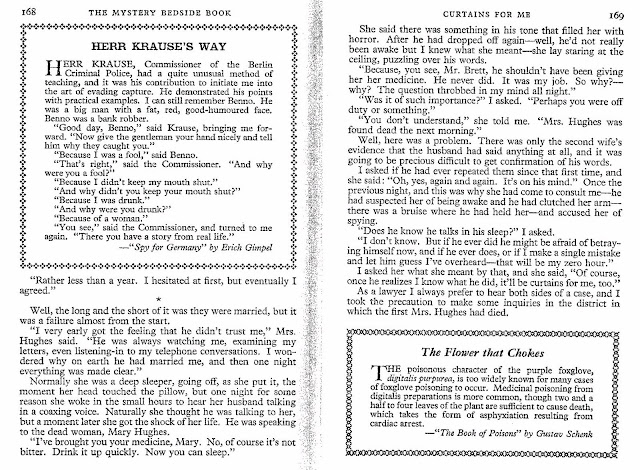 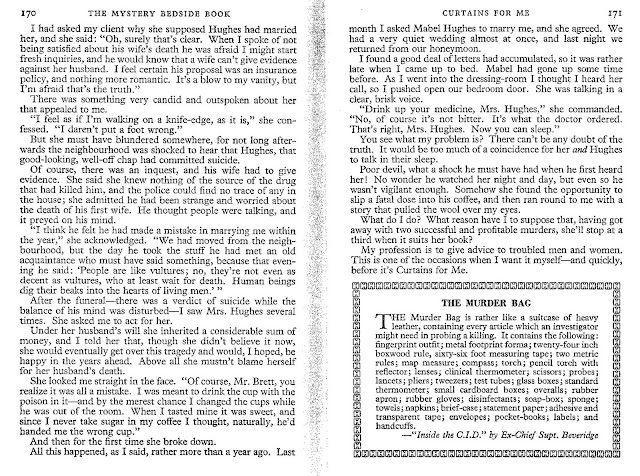 Reprinted from The Mystery Bedside Book, 1960, edited by John Creasey.
Posted by Jack Seabrook at 1:22 PM No comments:

Welcome to Fredric Brown Rarities!  My name is Jack Seabrook and I am the author of Martians and Misplaced Clues: The Life and Work of Fredric Brown, published in 1993 by Popular Press.  I have been collecting Fredric Brown's writing for a few decades, and I wanted to share some of the more rare items in my collection with other fans who might otherwise never have the opportunity to see them.

"The Deadly Weekend" and The Screaming Mimi

The Screaming Mimi was written in 1948 and published in book form by E.P. Dutton in the fall of 1949.  It is one of Brown's best and most popular novels, having been reprinted numerous times in the past 61 years.  A book club edition of the original hardcover is easily available and that is the edition I will be referring to in these remarks.

Before the book was published, however, it appeared in the fall 1949 issue of Mystery Book Magazine, a detective pulp that had published a number of earlier Brown stories, including short versions of three other novels.  The cover date of fall 1949 suggests that the magazine was on newsstands in the summer of that year, since the cover dates were meant to ensure a long life in the stores.  I am certain that the magazine publication of "The Deadly Weekend" preceded the book publication of The Screaming Mimi by a couple of months.

Comparing the short versions of Brown's novels to the book versions is instructive, because they sometimes were years apart and demonstrated considerable rewriting or expansion.  However, "The Deadly Weekend" appears to me to have been a heavily edited version of The Screaming Mimi, since almost all of the changes involve cutting words, lines, or passages and rarely is anything added to the magazine version that is not in the book version.

The magazine contains no art credits or editor's name and is copyright 1949 by Best Publications, Inc.  Volume 9, number 1 has a 25 cent cover price and runs 162 pages, including covers.  I have attached scans of the cover, the table of contents, and the first chapter to this post.

The editing of chapter one consists of cutting about 360 words from the book version.  If one assumes that a page in the book is about 300 words long, this means that the magazine editor cut just over a page of material for the short version.  The editor typically breaks up long paragraphs into shorter ones and cuts out some expressions apparently deemed too offensive for magazine readers, such as "hell" and "Jesus."  The plot does not change, but many nice desriptive passages have been removed, such as "I mean, it's bright with lights, but dark with the shadows of the defeated men who sit on the benches, all night long" (book, p. 8).

Two remarks that might be considered offensive today were fine in 1949, both in the book version and in the magazine version.  The first is the paragraph on page 11 of both versions, when Sweeney walks south on Clark Street in Chicago and considers mugging a "fairy":

Someone was coming toward him on the sidewalk.  A pretty boy in a bright checked sport jacket.  Sweeney's fists clenched.  What would be his chances if he slugged the fairy, grabbed his wallet and ran into the alley?  But he hadn't ever done that before and his reactions were too slow.  The fairy, edging to the outside of the sidewlak, was past him before Sweeney could make up his mind.  (magazine version)

It is notable that Sweeney's hesitation is not out of a sense of right and wrong, but rather out of inexperience with crime and decreased ability due to alcohol.

In his days as a legman he'd seen enough blood to last him.  Like the time he was right after the cops going into the pool hall on Townsend Street where the four reefered-up jigs had had the razor party--"  (magazine version)

I do not want to judge the author for these passages from the perspective of 2010; they are interesting because they show what was acceptable in popular fiction in 1949.

One other fun item of interest in chapter one (and other places in both versions) is the way in which Brown uses places, mainly the streets of Chicago and also Bughouse Square, the city park in which Sweeney is asleep on a bench as the novel opens.  In a later post I will show how it is easy to follow Sweeney on a map or on foot, if one is visiting Chicago.  In fact, all but one of the locations in the novel are real.

I hope everyone enjoys "The Deadly Weekend" and I welcome comments!

(Due to concerns about copyright law, I have deleted the scanned pages.)